True Craftsmanship – the recipe for mastering the crisis

How to survive the crisis? Who would know better than Giorgio Salimbeni? Salimbeni is a brand name for luxury accessories and high-end enameled silverware. Giorgio Salimbeni can look back over six decades of experience, successfully mastering the digital revolution and deep crises such as the current one. Emaille Art talked to Giorgio Salimbeni about the past and future challenges of digitalisation and how he adjusted to crises and a rapidly changing environment. The key ingredient he sees in the recipe for his success is true craftsmanship.

Has the digitalization of production revolutionized how your firm works compared to 60 years ago?

Indeed, the recent digital revolution has substantially changed production processes in all sectors, including in the field of crafts. The changes have been felt more in the field of gold and jewelry than in silver, above all because of the different volumes with which they work. The very modern 3D printers that create objects in meltable wax, solely supported by a three-dimensional drawing, have completely revolutionized production techniques: a ring, an element of a bracelet or a necklace, can be easily obtained only by drawing them and ‘printing’ them. Even for silverware we are using 3D printers for all the smaller details. Slowly, their use is even being considered for larger things. 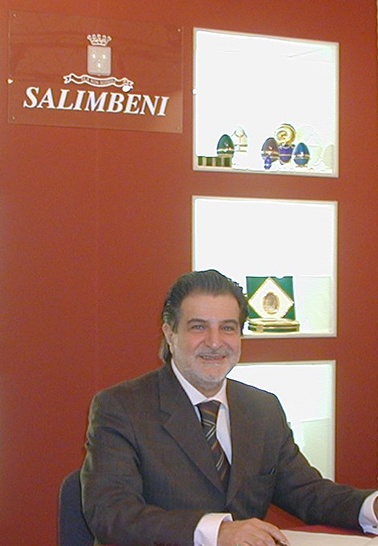 Some other very manual artistic processes, on the other hand, are not easily replaceable, for example enamelling, because it would perhaps be more complex to equip a machine to carry out the work of depositing the crystal powder of the enamel in a limited area of an object than to do it manually, when manufacturing very low quantities of identical objects.

We are only at the beginning of the digital transformation of this sector. There are machines that became available only a few years ago able to design and create a three-dimensional hologram on which a micrometric metal powder fixed by laser is deposited. For the time being, the costs of such machines are very high, but in the future they may become affordable. A modern silverware workshop, and even moreso a goldsmith's workshop, must be equipped accordingly, and today’s workers must be more qualified in the design and electronics sector than in the kind of specialized manual work used until recently. Unfortunately, craftsmanship is being penalized and must substantially change to survive. If the use of equipment becomes too widespread, production will necessarily be "industrialized" to the detriment of craftsmanship.

Has the supply of artisans with whom you work, for example miniature painters, changed? Is it difficult to find qualified artisans today?

All the artisans work only manually: artisans such as enamellers, miniaturists, burin engravers, engravers, stone setters, have not changed precisely because their type of work has not changed. It remains necessarily manual, even if it can be done a little easier by some more modern machine. In the field of engraving, you can make your work easier using modern pantographs, but you notice the difference because the burin "cuts" the metal, as does the "guillochè", while the pantograph uses rotating cutters, whose engraving does not have the " brilliance ”of the raw cut. 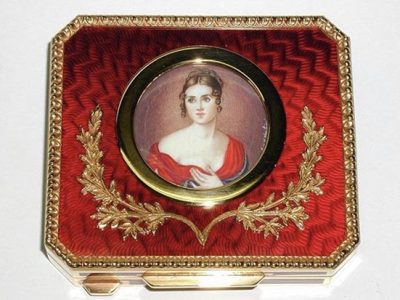 The problem is that the chain through which for centuries the various "arts" of processing have been handed down from master to disciple has been broken, so only old craftsmen survive and almost no young people are taking their place, despite the lack of employment.

How important is the Internet for your work? You are active in social media - how helpful is this kind of marketing for Salimbeni compared to word-of-mouth marketing?

In the first years of this third millennium, I personally had already understood the changes that were taking place, and I had proposed to some producers of precious objects, who were also friends, that we found a consortium of companies that, under the name of "Luxury from Italy" (but it could also have a different title), would open its own Internet portal to sell precious objects.

Unfortunately, although they were all younger than me, they did not understand the change that was taking place, nor my determination to take advantage of it. Therefore, after some meetings and discussions, nothing came of it, and we lost the opportunity to create this initiative at a time that would certainly have given us an advantage. Some of these firms closed down a few years later.

By offering our products "on-line" to private customers, we would have bypassed our regular customers who were mostly retailers, but precisely in order not to damage them, we could and should have raised the sales prices thus obtaining a considerable margin of revenue to be reinvested to advertise the portal itself.

Maybe we still have time to try something similar today, but the scenarios have changed a lot, and then was really the right time. It’s also possible to produce and sell precious items through the online distribution offered by giants such as Amazon, E-Bay and several others, but it is difficult to stand out in these vast “oceans”.

Has digitalization changed the market structure?

All this has also caused radical changes in commerce because electronics greatly favors the production of objects in numerically high quantities.

A very complex 3D drawing is rarely made to create a single object, and this favors the production of numerous specimens that can only be promoted if accompanied by something significant such as the "brand" of the company that puts it on the market.

For this reason the numerous "griffes" were born, selling objects produced by small factories and also numerous small artisans, and enhancing their value beyond real terms by calling themselves "Gucci, Cartier, Bulgari, etc.", thus achieving wide support. Obviously, the greater cost of these products is caused by the advertising effort needed, so they must not be too expensive at the source, and in the end they are exaggeratedly overrated. 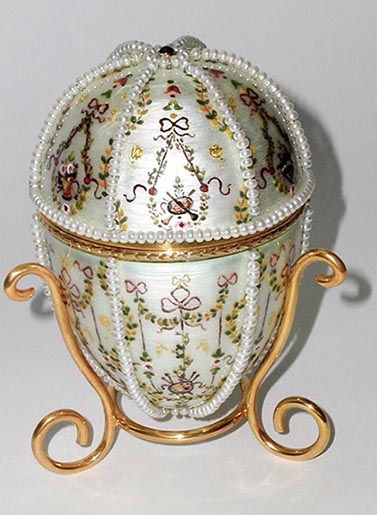 Obviously, the greater cost of these products is caused by the advertising effort needed, so they must not be too expensive at the source, and in the end they are exaggeratedly overrated.

For these reasons, distribution is only through single-brand stores or online, to the mortification of all the other retailers who for centuries have offered products whose real value is guaranteed. That is to say, the local jeweler sold jewels to his own private customers, guaranteeing the quality and value of the objects himself, so that trust was placed in the merchant himself. All this no longer happens because the trust is exclusively generated by the "brand"—to the detriment of the real value of the object.

How much have you adjusted to the fashion of the time over the past decades?

With regard to the "styles" of fashion that have occurred in recent decades: in our sector, they have not caused any shocking changes. Jewelry and, even more, home deco objects have followed the current fashion, but have always remaining anchored to the classical tradition, and changes have always occurred slowly. When you sell an expensive piece of jewelry, it must remain current for a long time; it cannot last a single season or a little longer, like a dress or a pair of shoes.

Even our efforts to offer our customers something more modern have never achieved much success. In the 1970s we tried to produce objects with a new, pure design, making use of the stylistic contribution of a good architect friend, with and without enamels (see various photos in the “Up Line” collection posted on Instagram).

While I believe many of them were truly good, they have never met with commercially appreciable favour, and only a few have been in our collection for a long time.

When reproducing new objects in the classic styles of the past, we have always tried to modify them to make them current and more original. We have always had to comply with the requests of customers around the world, often with considerable success. For example, when we began to exhibit at jewelry shows in New York (for the first time in 1975), we met new clients, even very prestigious ones, passionate about art deco (many buildings in New York built in the early decades of the 20th century are in art deco style) and we immediately produced a collection of art deco objects that met with considerable success. You yourself have appreciated objects in this style.

When we started working with Arab and Middle Eastern clients, we designed and produced objects that suited their taste. 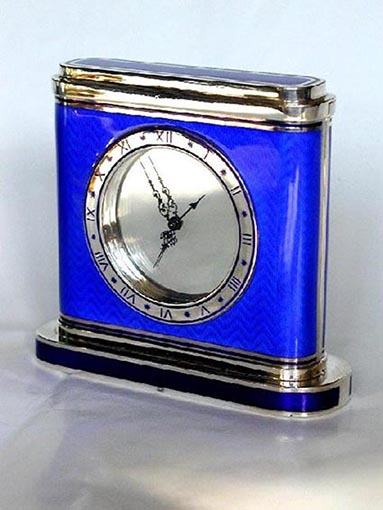 For our new Russian customers, after the fall of the Berlin Wall, we dusted off the Empire style, to which they had remained mnemonically linked, taking inspiration from the objects produced by Odiot (another great customer of ours) in France at the time of Napoleon.

We have always tried to understand what customers need in every part of the world in order to be ready to propose what they want, but we have rarely been able to impose a new modern style that was not the reinterpretation of a classic style.

Given that we are going through a big crisis, what would be your expectations for the high-end artwork market over the coming years?

What scars the Covid crisis will leave are yet to be seen. At most we can try to hypothesize them. We are all suffering right now. But this pandemic will surely have helped Internet sales, and when it’s over the most famous brands will be favoured because they offer their names as a guarantee to the general public (which is handsomely charged, to the detriment of value). The most penalized are the retailers forced to stay closed for a long time and uncertain when there will be a return to normal.

You have mastered earlier crises. What has been the recipe for your success?

Our success is certainly derived from the fact that we have always been producers of luxury items—expensive, but in demand with our customers. Our production has always been based on manufacturing quantitatively limited though not really “unique” numbers. This has ensured we stay in the field of true craftsmanship, facing competition that has even become minimal over time. Thus we have always found customers around the world who like our things and who are willing to buy them, even in times of crisis, also because we are always ready to anticipate their desires and thus to satisfy them.

If you don’t mind, would you share with us which artwork you are most proud of?

There are many objects produced in our decades of activity of which we are proud. Most of them are ones that we show with pride on our social media accounts: Facebook and Instagram. We are especially proud of their dimensions, of our beautiful hand-painted miniatures, or of our particularly refined engravings. In addition, there are numerous other objects made specifically for special clients, featuring hand-painted enamel miniature portraits of living people, even very important ones, which we do not publish to preserve their privacy. Nevertheless, we are proud of them as well.

Emaille Art would like to thank Cosimo Pacciani for conducting this interview.

Am Nonnenhof 9
60435 Frankfurt am Main
Germany